Travel through Sweden by Train: A Must-do Swedish Experience

Travelling by train has become increasingly popular among people who wish to slow down and escape the sometimes-hectic everyday life. Trains are a good way to get around, especially in Scandinavia. It is convenient as train stations are often centrally located and it is an eco-friendly alternative to flying.

Anette Karlsson is the CEO of Haman Group, Authentic Scandinavia's mother company. Being based both in Stockholm and Oslo Anette commutes on a regular basis.

Anette advocates for the environment by taking the train and she recently travelled through Sweden by train: Her journey included both day and night train. She happily shares her experience with us in this Q&A.

Nostalgic feelings - From Stockholm to Kiruna by night train

Why did you decide to travel by train?

For me, travelling by train is a great alternative to flying. You start the journey from the city centre and sleep while travelling, so you don’t “loose” any vacation days. During daytime you sit comfortably and in the evening, when you want to go to bed, you roll out the sheets and duvet and your seat is transformed into a bed. Next morning, you roll the duvet and sheets back in and the bed is quickly transformed into a seat again. I was directly shown to my compartment. It was convenient.

Can you explain in detail how it is to travel by train in Sweden?

In Sweden most trains are operated by the Swedish railway company SJ, which is owned by the state. Nostalgic feelings hit me as I walked into the train taking me at least 40 years back in time. I enjoyed that. It made the experience more authentic.

Did you sleep well?

The bed was surprisingly comfortable even though relatively narrow. I slept very well.

Swedish skiers, the world’s largest underground iron-ore mine and the famous Ice hotel

What was the best thing about travelling by train?

To travel slow! It was amazing to see the landscape changing outside the window while being comfortable and relaxed inside a warm train. It was also great to see and meet all kinds of travellers from all over the world. I was travelling in February and many of the passengers were tourists on their way to the Ice Hotel in Kiruna and to Abisko. I also spotted a large number of Swedish skiers well prepared for one of Sweden’s ski resorts. In Northern Sweden, you might get to ski below the Northern Lights.

At what time did you arrive in Kiruna?

I arrived in the morning. I have been to Kiruna several times before and on this trip I only spend a short amount of time there, before I continued towards Narvik by day train.

Can you tell us, a bit more about Kiruna and its surroundings?

Kiruna is the northernmost community in Sweden. It is a mining town and it is a popular place to visit for people travelling to Lapland to enjoy winter activities. The mine is the heart of Kiruna and it is the world’s largest underground iron-ore mine. It is visible from everywhere in town and it keeps expanding below the city. For security reasons the local government has therefore decided to relocate the town. The moving of the town has already started and should be done in 2022.

Just 30 minutes outside Kiruna you find the small village Jukkasjärvi, home to the famous Ice hotel. Every year the Ice hotel is rebuilt from the ice they collect in the nearby river and artists from all over the world come to create and design the rooms and suites. This year the 29th Ice hotel was built.

In 2016 the Ice Hotel built a year-round ice hotel - Icehotel 365, which is a permanent structure cooled down by solar panels. Today it is possible to stay at the Icehotel 365 all year. This is a great way to escape too hot summers. 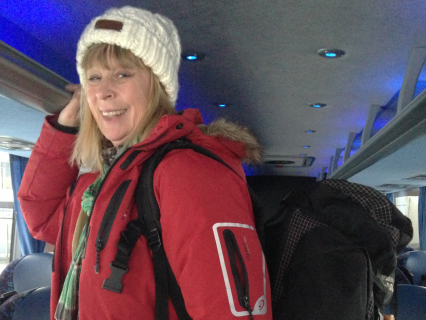 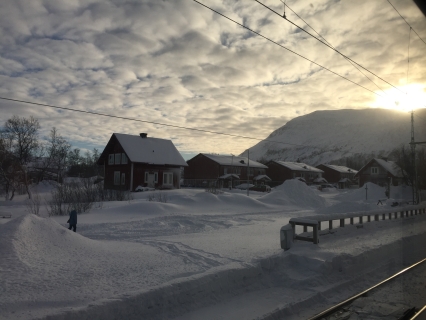 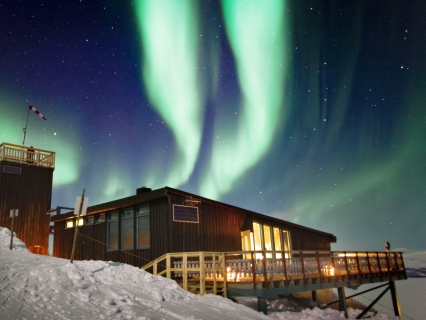 Have a look at our recommended tours

Unforgettable views - from Kiruna to Narvik by day train

From Kiruna, where did your journey take your next?

From Kiruna I took the train towards Narvik. On this stretch you pass by Abisko, one of the most popular national parks in Sweden. It is said that Abisko is one the best place to see the Northern Light and I am sure that is true; I have been there three times and saw the most fantastic Northern Lights all three times. I can recommend visiting the Aurora Sky Station.

The stretch from Abisko to Narvik is the most scenic railway journey I have ever experienced. When you cross the border at Riksgränsen the view from your window changes dramatically. Coming from the wild Swedish mountains the stunning Norwegian Fjords makes quite an impression. This is a view I will never forget!

When to travel by train in Sweden

We, at Authentic Scandinavia, believe all seasons are equally good for travelling by train in Sweden. In the dark winters you will experience purple and pink skies. In spring, sunshine and singing birds are celebrated and in summer the Swedish nature is wild with its mountains, trees, lakes and animals. If you are lucky you might even spot a moose from your window seat. In autumn the nature is transformed into a magical plethora of red and gold colours.

Sweden Winter Adventure
5+ days
Winter
Train
Travel from Stockholm by overnight train to Abisko and the Ice Hotel in Jukkasjärvi. FROM EUR 802